1
0
I do data analysis for my day job.  I was very curious if Reiss really did get lucky at the final table.  Now, pre-flop all-in equity of two hands is not a perfect measure of the value of a hand in a heads-up match, but it is something we can work with.  Let us look at the pre-flop equity of each match-up of hands: 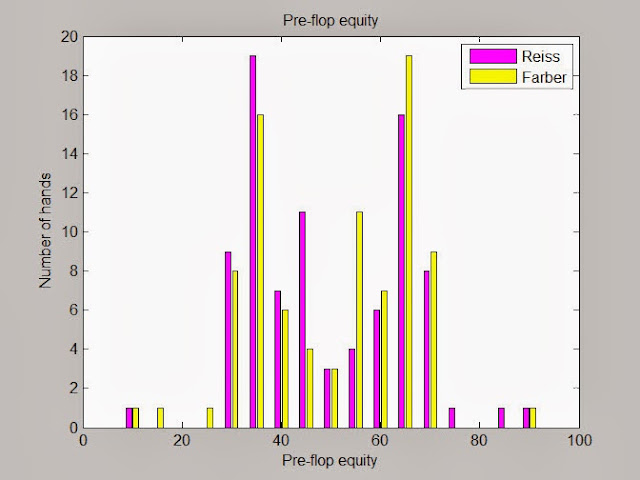 Not thinking about the playability of the hands, Farber actually has a negligible advantage in the starting hands.
What about the board run out?  The following graphic shows the equity for Reiss on the final street of play, and the win or loss he got that hand. 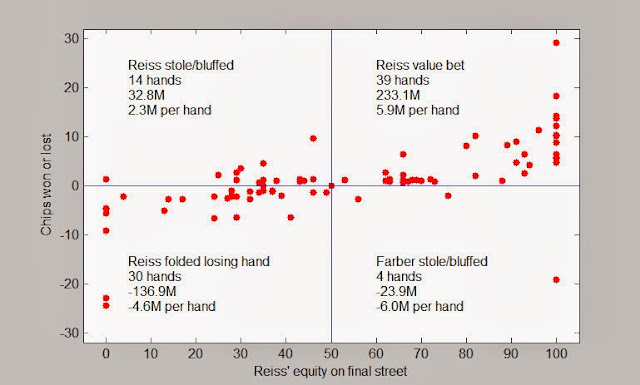 So looking at this chart, in the upper right  corner are the hands where Reiss won at showdown or made the final bet with greater than 50% equity. He had 39 hands in this category, where Farber only had 30 hands where he did the equivalent.  The average size of these hands was 5.9M for Reiss but only 4.6M for Farber.   Hands that are on the far extreme to the right made it to the river at 100% equity for Reiss.
What about steals and bluffs?  Reiss bet with the worst hand and won 14 hands.  One of these was at the River where he had 0% equity and won a small pot.  His average was 2.3M on these hands.  Farber had far less hands where he was able to push Reiss out of his hand.  Notice though he pushed Reiss out of one big pot with his famous bluff.  Farber actually did much better per hand on successful steals because of this bluff.  Overall, the stealing back and forth these two did changed very little to help Reiss directly since he only stole slightly more than he was stolen from.
What Reiss’ stealing did however was prevent those hands from moving into Farber’s value area in the lower left hand corner.  With his steady aggression, he was able to take hands that could have been in Farber’s value corner and prevent them from ever being played out.
Look at how many hands Farber held the higher equity hand on the final street.  He held it more often by one hand.
What do we take from this in cash games?  Well placed aggression wins.  That continuation bet on the flop when you have two overs and fold out a small pocket pair are wins.  You had the lower equity yet won.  Pushing opponents out of their middle strength hands will deny them lots of pots.
No attempt is made in this analysis to understand how playable the hands were.  For instance holding a pocket pair of Fives might put you ahead in equity, but it is near impossible to play them for value on many boards.

Buy Poker Plays You Can Use direct and support the author, please! 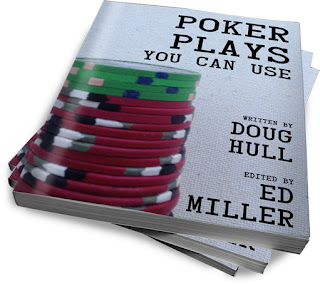 The featured image for this post was originally found here.

Doug Hull
I am a poker player and author of the book "Poker Plays You Can Use". Contact me if you are looking to improve your live poker game.
Recent Posts
Recent Articles
Free Video
Terms Of Service | Privacy Policy
Copyright All Rights Reserved © 2017
Contact Doug

I get back to people pretty quickly. Play an interesting hand, have a question about the book? Say hello!